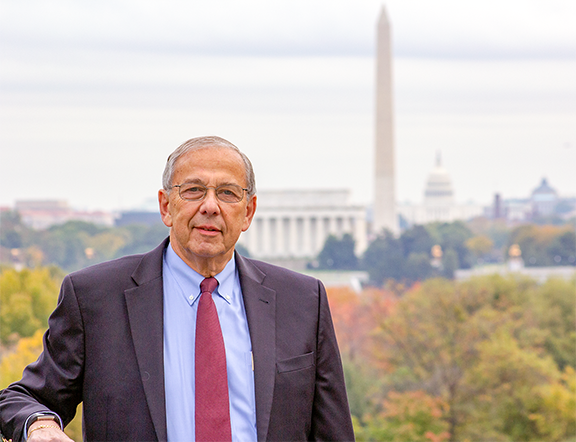 At their annual gala in early November, the Northern Virginia Chamber of Commerce and Professional Services Council announced which companies and executives will receive this year’s Greater Washington Government Contractor Awards. In this 17th annual awards ceremony, the Council inducted Dr. Edward Bersoff into the Greater Washington Government Contractor Hall of Fame. As founder of BTG as well as founder and chairman of Parabilis, Dr. Bersoff was recognized, among others, for his great success in the industry. Upon accepting this award, Dr. Edward Bersoff delivered the following speech.

“Thank you, members of the Chamber and the Professional Services Council. Your recognition in this way is extraordinarily meaningful to me!

Bob Kreuger, Harvey Kushner, Al Nashman, Bob Beyster, Earle Williams, Wayne Shelton – these are names – some of which you may not recognize – but these are the pioneers on whose shoulders we stand today, pioneers who established, indeed defined, the govcon industry. When I came to town exactly two and a half score years ago, these are the folks whom I learned to look up to, whom I aspired to emulate.

They had at least three important things in common. First, as products of World War Two and Korea, they were true patriots. They believed and lived the American ideal. They wanted their efforts to advance the democratic principles on which our country was founded. As was often said, they bled red, white and blue. Second, they were smart businesspeople. They understood how to build a business, the importance of both customer and employee satisfaction. They also understood the importance of making a profit. They saw nothing inconsistent in simultaneously serving their country and serving their shareholders. And finally, yes, they were all OWG’s. Now if you’re unfamiliar with the term, just ask the nearest woman in the audience. She will know!

We can’t and shouldn’t apologize for that shortcoming- it was a condition of the time. As the father of daughters and as the husband of an accomplished woman in her own right, it was clear to me back then that times needed to change! And today our industry thrives because you only need to look around to see that the landscape has indeed changed.

Happily, today our corporate leaders are so much more diverse and include people of all sorts – and we are all truly better off for it.

Then my challenge to you is to embrace and to continue on that trajectory. If you can, find a way to help others to achieve success. Pay it forward and pay it backward. Our community – and our country – will reap the benefits. I am so proud to be up here, but I look forward to the day when OWG’s being similarly recognized will be the exception rather than the rule!